Well, here we are in October, which means in Indiana it is now officially Fall. This is the card I made to go along with the challenge over at There's Magic In The Air. It was a color challenge brought to us by Nilla and you can find more details here. I must admit I kind of fudged just a little on the colors... I had to add a little more color on my image but on the design on my card I kept true to the orange, black and one other color which I chose yellow (oh maybe not, I guess there is grey in the house, but isn't grey just a lighter tone of black? :O) ). When I was at Micheal's I seen these cute little wooden houses and there were some ghost, but I picked up this cute house and thought it would make a perfect home for my mouse here. I knew instantly when I found that house that I wanted a big yellow moon tucked behind the house. So, I used the swirls cuttlebug embossing folder to add some texture to my moon, and I added a touch of orange ink to the texture on the moon. I also found the ribbon with the yellow stars that same day and used it at the top. I decided to cut my image out to make the scene, but accidentally cut off one of the vines so I drew a few more on the pumpkin. I added 2 small rub-ons which was the spider's web and spider hanging from each side of the house. I also, used the swiss dots embossing folder on the black paper to make it look kind of like stars in the night. OK, Nilla you can slap me I didn't quite follow the challenge, but hey I did end up with one mighty cute card! 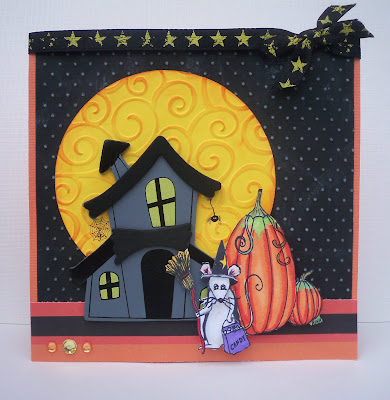 I have to say I just love this image and I had a lot of fun using it. I hope you do too, so in the mean time have a "mice" day!