It's another Magical Monday over at Paper Cupcakes! This week over at the Paper Cupcake's Challenge Blog the challenge is brought to us by Jenn Cochran. She wanted us to make a shaped card and it couldn't be a square or rectangle. I am not sure how well I did with this in keeping with the rules, but I did a coffee mug and I thought it was a great idea, but then I had reservations about it being kind of rectangle shaped with a handle, but I went with it anyway, because it is was officially a mug shape and there were plenty of circle cards. That's my story and I am sticking with it!! :O)

So, I used the freebie "Sending Love Your Way" by Paper Cupcakes and made it the picture on the mug as to make it a birthday mug. I used the name of the image as the sentiment on the tag on the handle. I made the inside of the cup pull up to reveal the inside sentiment of the card. I also made a stand on the back of the card so whoever receives this card can actually stand it up. I used Bic Mark-its to color the image and added some yellow Stickles on the envelopes and made my little tag and added it with some fiber. This is either the first time or second time I have attempted to do clouds with chalk. I thought it turned out pretty cute and will probably do this again. I don't feel like I am very good or creative when it comes to a shaped cards, but I really do like how this turned out. 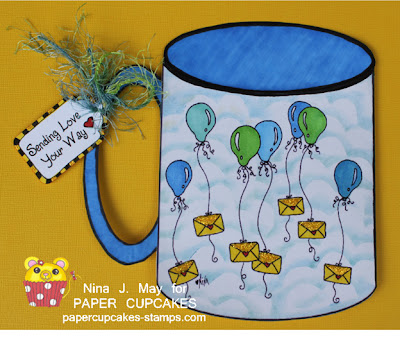 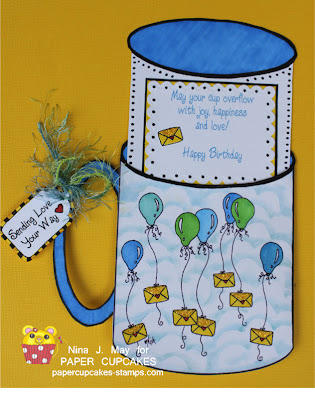