Happy Monday everyone! OK, I know people in general look at Mondays and don't usually connect happy with it, but hey you have to start your week sometime, so why not make it a happy one! This weeks challenge over at TMITA is brought to us by Sue Walsh. It was to make a clean and simple card. Clean and simple can sometimes challenge me, but I really love the card I made with this image "Softly Afloat" by Paper Cupcakes this week. The only thing I colored were the stems on my flowers. I printed the image once on white card stock, twice and orange card stock and once on yellow card stock. I then cut out the orange flowers twice and glue the first ones down, then placed the second ones on pop-up dots and then just glued down the yellow ones as well as my butterfly. Then I just matted the image and then placed that on a larger mat, tied my pretty green ribbon on and it called it clean, simple and complete. The sentiment is computer generated and the font is Santa's Sleigh, which is one of my faves!

This week has just flown by and my time seems like I have no time. I have worked on mural type work all week during the days and the evenings have been consumed with softball and baseball games and practice. I will be working again this week on my work and hopefully will finish it up by the end of the week. We froze on Saturday during the games, it was really cold and there were high winds which made it twice as cold. I took like five blankets for the girls to keep warm with since they were in shorts (I was wearing my winter coat with gloves). I lost a blanket and my cell phone in the process of getting back to the car, but the day ended with good news both were returned to me hours later which made me quite happy. I had a nice Mother's day, attended church, went out to lunch, came home and took a nap, called my mom and made my card for today and will head for bed early since I have to head out for work in the morning. 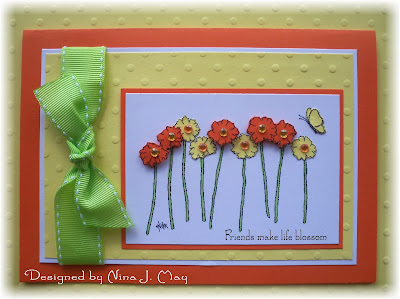 So, have a great Monday and thanks for taking time out of your busy schedule to stop by and visit me!