Yes, that's right is another Magical Monday over at There's Magic In The Air! This week's FREE image is this super cute lion and mouse that are pals! The name of this image is "Nate & Av - You're Special". Just in case you are wondering the lion is Nate and the mouse is Av. Since I am the artist you might be interested to know a little interesting fact about this stamp image (soon to be series). I have an 18 year old son (well soon to be) and a 6 year old son. This image was designed with them in mind. I often look at them when they are wrestling around or messing around and I am always telling Nathan to be careful with Avery because he is so much smaller in size. I am always scared he is going to hurt him unintentionally. So, I thought how fun to make a stamp of buddies were their admiration for each other was so big, but their sizes were such the opposite. Now I bet you can figure out where their names came from too!

This card followed this lovely sketch provided by Nilla one of the Designers. So, with this sketch you could turn it, flip it or whatever, as long as you can still see the sketch in it. So, I did just that I flipped it vertically. I loved how my card turned out with the sketch; super cute. I colored my image with my Bic Mark-its and chalked my sky in yellow, pink and blue which also has a shimmer to it, but you really can't see it here. I added some buttons with floss and then I just punched out three blue holes to add the three elements on the one section. Added my sentiment on a pop up dots. Then added my ric-rac. I just LOVE ric-rac! I also drew some extra flowers on the side in the image. I always leave space for things like that in case people want to add things to the image. I am one of those people that will do stuff like that. 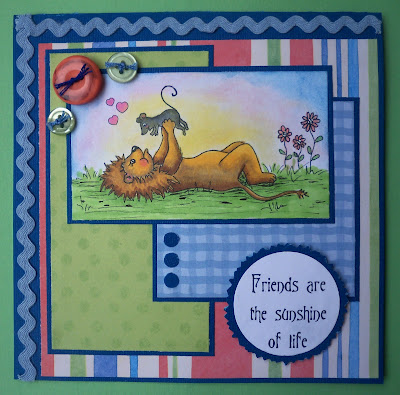 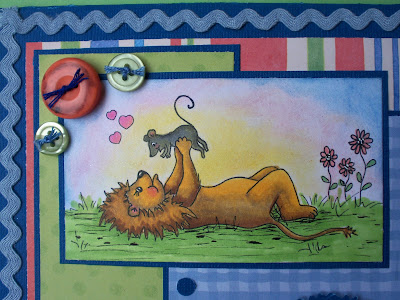 Well, that's if for Nate & Av. So, why don't you go snag the image, play along and make a card and send it to someone and let them know that they too, are Special!