This week's challenge over at Paper Cupcakes is brought to us by Nilla Berglie. She chose the colors Red and Cream for us to work with this week as the challenge. I loved working with this color combo and made 4 cards. This first card I used the image "Angel" by Paper Cupcakes and colored her red with my Bic Mark-its and used a cream colored pencil to shade her dress just a little and a copic for her skin tone, but left her mostly cream like the card stock she was printed on. I did not have any cream and red paper so I used red pattern paper and lots of cream card stock. On my image after I colored her I cover the whole piece of card stock that she is printed on in a holographic heat embossing powder, then embossed it and it turned out beautiful. You could also use any of the tinsel or transparent glittery embossing powders. I have used the Embossing Tinsel - Bridal and then the Holographic and both work beautifully. I wish you could see this in real life, because it is beautiful and it was hard to photograph the effect so it reflected how it really looks. The third picture represents it the best I think. 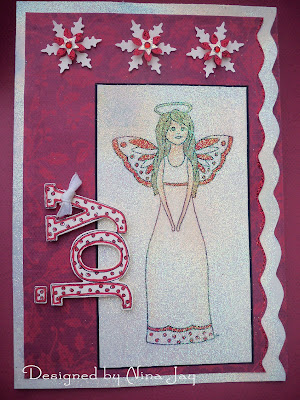 The Joy is a die cut by Sizzix which came with some embossing folders. I cut it out in cream and then added all the color and doodling to match the bottom of her dress. I then added the bow. 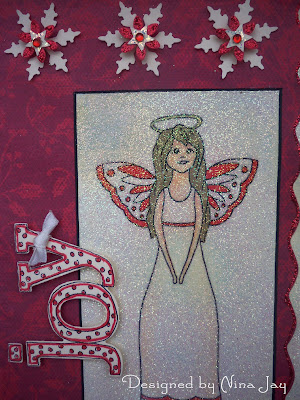 I did the same technique on the outside of the cream part of the card that I did on the image and then added some Stickles to the red edge as well. I punched and made my snowflakes. 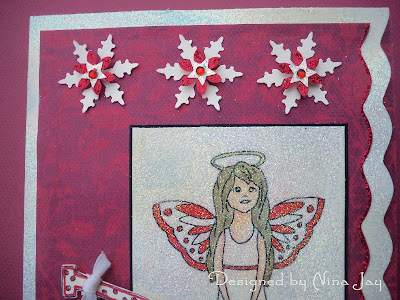 This next image is also from Paper Cupcakes and is called "Praise Him". The background paper is a much richer red than it reflects here. I colored the whole image with Bic Mark-its and her skin with copics. I added some pink to the edges of her dress, because I thought it would be a lovely contrast and added some red Stickles at the top of each ruffle. I distressed the edges, because I thought that would give it the feel I wanted. 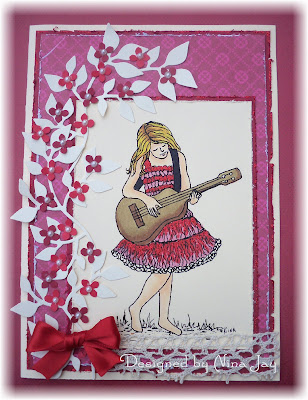 The leafy vine is a Sizzix die called "branch with leaves". I used 3 of them to make the vine and then used the Martha Stewart punch for the little flowers and punched them in two shades of red, then added the little pearls. 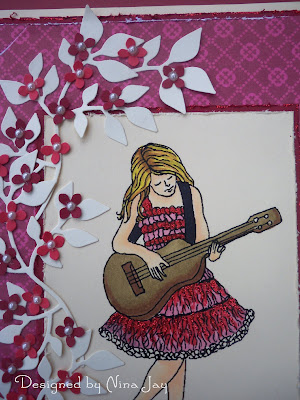 I then added the lace and bow. I really loved how this card turned out and it was my favorite of all four. 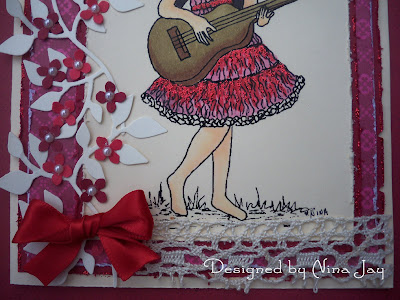 These next two cards are quite simple and I try to keep them somewhat flat, or kind of one layered. I colored this image quite a while back in photo shop. It was probably one of my first I tried to do this in. I wouldn't say I was overly pleased with it, but I printed it out back then and so I thought I would just use them to make a few cards for Christmas. They aren't awful, but not great either. I kept these simple and just used my scraps from the other cards. I kind of wish I would had used cream ribbon for this top card to make my bows, but the red looks ok, and shows up a little better than this in real life. I still might add something to this, but not sure what, so I will just sit it aside for now. 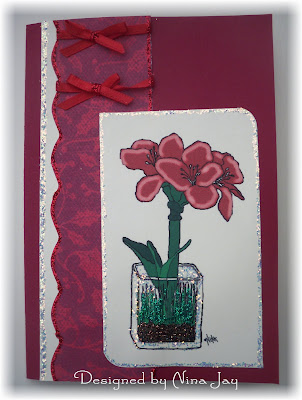 This is the exact some image, just printed twice back then. I kept this card somewhat flat as well. I did my Stickles a little different on the vase. I like the above one better, but I do like the design to this second one. 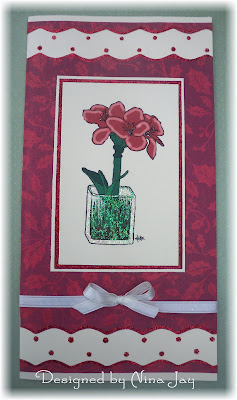 Well, that's it for me for now. All these cards look lovely together here sitting side by side in the red and cream. It was a great color combo and I would encourage you to do something outside of Christmas with it. That is why I did the girl playing the guitar and she turned out so lovely. I can't believe this Thursday is Thanksgiving in the US! Time is just a flying by and and before we know it, it will be Christmas, then the New Year! So it will be a busy busy week, but I am looking forward to it. So, have a great week and thanks for stopping by!

Hey you, so many beautiful cards! Love all the die cuts details on them! Great take on my challenge!! Hugs Nilla