This week over at the Paper Cupcake's Challenge Blog; There's Magic In The Air; which you can find HERE. Ildiko Cseh brings us our challenge this week and she would like to see some "Sparkle, Sparkle, Sparkle". Well, not sure how much of my "Sparkle" you can actually see on my card, but it is there. I used one of the new releases from Paper Cupcakes called "Snowman Cupcake" and one of the Christmas tickets by Paper Cupcakes. I actually colored this whole image in photo shop which is new to me. I was trying out a tutorial on how to color in layers and although you really can't see much of my coloring it really did turn out well. I also made the paper design you see on the card too. I seen a card something like this with the little windows on pinterest and thought it was a cute idea so I cased it somewhat. The only thing is I messed up on how I did my images. I meant to put the top image in the middle and the middle image at the top. I glued one on and didn't realize I glued them in the wrong spot until it was too late to switch them, so I just left them alone. I added the sparkle with red and icicle stickles on the pattern paper I made to the dots in the middle and red to the ticket. This was really a pretty quick card to make too. I thought it turned out cute, although those mixed up images drive me a little crazy.... oh well. 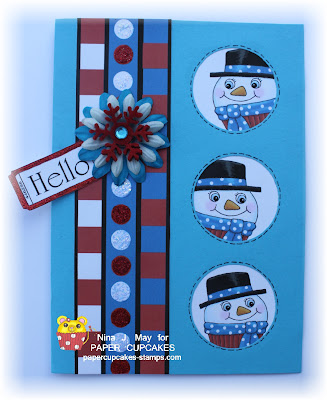 Well, that is it for me this week, have a great week and thanks for lurking by.

Nina,this is such a fun way to use the image - it is a great image but this makes it look so playful and fun! Cute, cute, cute! I am putting this image on my wish list! Hugz!

Nina,
What a wonderful and adorable card. Of course, my fav color is blue and so I love the different shades you've used on this card. The snowman looks cute with this polka dots and the pretty DP is perfect!