This week's free digital image from There's Magic In The Air is "Dancing Hearts". I figured when most people see this image they are going to think Valentines Day. I know I would. So, I thought I would think out side the box and attempt to use non-traditional heart colors. Not sure how well I achieved that, but I still felt compailed to pull a coral color in to have some contrast with that blue. Certainly not a valentine look though, maybe more a country feel? I don't know what do you think? LOL... Anyway I started with a blue card stock and then I added the pp which is K&Company added the 3 lines of ribbon and bows; American Craft. I then used the swiss dot Cuttlebug folder to emboss the blue card stock I laid on top of the pp. I used my corner punch to make the hearts and feel some of the white area on the image and then I added some rhinestones on the vase and also to the right of the image. Added some red stickles on the tips of the drips and then added the sentiment of "where there is love" and on the inside the sentiment says: "There is Life". I will probably save this for an engagement type card, something a little different and non-traditional. 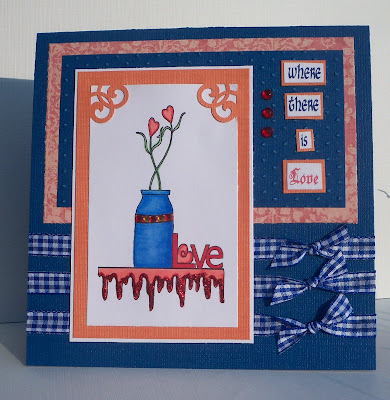 Well, that's it for me for Dancing Hearts. I hope you can spread a little love not only by snaggin this image, but by making a card with it and then sending it on to someone! Oh, and don't forget to leave me some luvins as well in the comments! Thanks for stopping by and taking a look!!

Love it, the blue gingham ribbons, the sentiment the whole everything is gorgeous! Hugs Nilla

Beautiful! You sure pulled the country look well. I love the colors you chose. Gingham, polka dots and checks are some of my favorites so it's always fun to see them in a card. Beautiful work!

Nina,
I was torn when I first saw this image--it's unline your other ones. It has a more modern feel. Yet I do like it--and it will push me to do something different.
GREAT job--
I got a wacom tablet last night so I'm doodling away today. Maybe I'll make an image eventually.

Hello nina...
this is another great image.
I just had to let you know i won the 1st challenge at creatalicious challenge (bizzy becs)using your wonderful beached boat image. Thank you so much... that and all your images are such a delight to work with.
heartfelt thanks love lynx

LOVE those gingham ribbons and bows! I need to remember that for my future cards. Really adds a great element to the card background. LOVE it! Best, Curt