This weeks challenge over at Paper Cupcakes was brought to us by Amer Hillman. She wanted us to use a Paper Cupcake image and use at least 3 different pattern papers. I decided to go monochromatic with white. I used the image Summer Breeze by Paper Cupcakes and the paper is by Paper Studio; back to basics. I colored my image with my colored pencils and chalked my sky. Made an easel card, I just love those, except when it comes to fitting it in an envelope. The sentiment is computer generated. 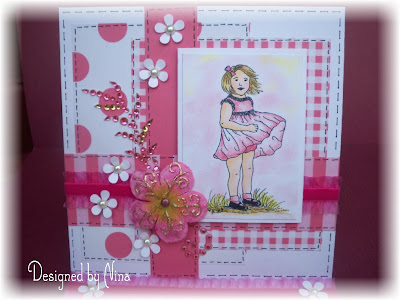 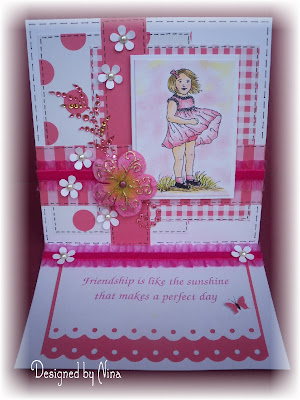 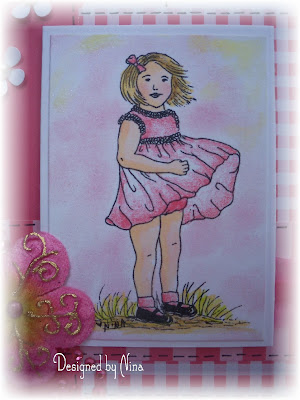 This card I did for last weeks CDAC challenge by Fairy Knoll. It was a 3-D challenge. I actually cut 5 inches and varied them on top of the original image, although I think it is hard to see the depth here in the pic. I then added the frame on pop-up dots to sit right above that, but like I said it is much easier to see all the depth and 3-D in real life. The image is also from Fairy Knoll. 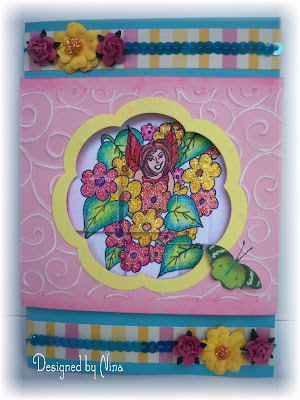 This is a card I made my friend Mindy in Ohio. I placed a bookmark that I made from the image Deco Flowers from Paper Cupcakes and placed that under some vellum to make it part of the front of the card, but it slides out easily. I colored it with my Bic Mark-its and then added some liquid glaze on the vase and some Stickles to the center of the flowers. My butterflies are punches. The pictures are kind of dark here, because the colors were much more vibrant. 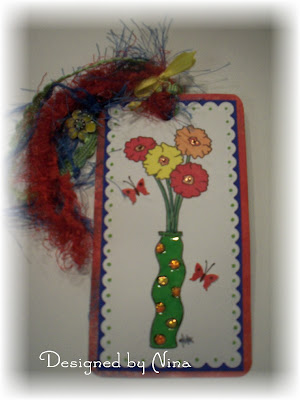 I actually made another card, but I made it with an image I haven't released yet, so I am holding off until I release it. :O) Well, thats all for me today, have a crafty kind of day and don't forget the cupcake!

Oh, I have the cupcakes. Did you see them on my blog? I have enough for the entire team! lol Love your cards. You have such talent. Your PCC card is just too sweet. You did a great job with the challenge.

Wow, you have been one busy lady creating all these cards. They are stunning Nina and I'm sure glad I don't have to pick just 1 to be my fav. Beautiful projects!!!
"Hugs" Carol

You've certainly been busy! Love your challenge card, so sweet and pink and lots of bling - what could be better!! Hugs, Dru

Love this weeks PCC card, pink and white and a cute image, what more to ask for! Other cards are also gorgeous! Hugs Nilla x

Beautiful cards Nina, you have definately been busy! I really love the bookmark card, what a lovely idea :)