Wow, I can't believe I am actually blogging two days back to back! Just kind of wanted to post some odd pictures of some things I have made or did over the last couple months that were actually something other than a card.

This first picture is a canvas I made for our school's annual dinner auction. The dinner/auction is to help raise money for our school; of course a good cause! Since the school our children go to is a Christian school I wanted the piece to reflect that. So I decided I wanted to do a picture with all the children's and staff's fingerprints, but then you run into making a piece that is fun and looks more then just a canvas with finger prints stuck on it. Since I loved the "UP" movie I kept thinking of the bunch of balloons that lifted the house up and thought "ummm.... a bunch of balloons would be nice. I originally drew a simple drawing of the front of the church and was going to attach the balloons to that, but I didn't want the canvas too big and it was already 20x24, not real big, but not too small, but adding the building I would have had to go up to a 24x30 canvas, so I decided to leave off the house and in place of that I did the verse "Once Jesus touches your heart, the fingerprints last forever." So, after I figured out the design I ventured out to get the prints at school this past week and then placed their first name on top of their print. I color coded each class and the key is on the back of the canvas. (so first grade was blue, second was red and so on..) I actually placed each finger where I wanted it, mainly because I wanted the colors to be spread out and the overall shape in a heart. Hope that makes sense. After having all the prints I came home and drew a balloon around each print and then strings to each print and "tied" them to the word Jesus. I just loved how it turned out and I think the children really thought it was cool. I did a big cross for church many years ago with the children and had them each paint a tile and then my dad made a cross for me to place all the tiles in. The cross hangs in the main room which is part of our church/school and the children still still love to go and find their tile (and they have grown quite a bit since then). So I know the children will continue to love finding their prints as well.

This is the finished canvas. It looks a little weird, because I forgot to take a picture of it before I place the plastic wrap over it. So you can see the wrinkles of that and it was a harder to photograph because of that. Oh well, you get the idea. This would make a great project for any school or class or even a family tree type project. I used my cat eye chalk inks for most of the prints and then sprayed the canvas with Deft to seal it. I also place a cute ribbon all away around the side edges which gave it a nice finished look. 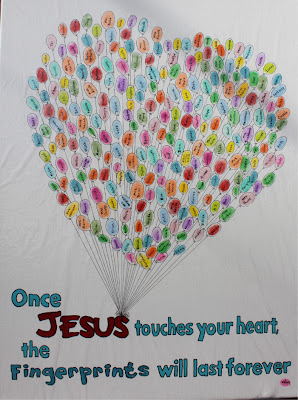 These next pictures are a canvas I did for the lady that does my hair. She has her own salon outside her house and I painted the salon walls a few years back and made two custom painting for her on canvas in black and white and added a touch color that I painted her walls with; back then. She also does nails, but I never get my nails done, but every time I go I see a dead spot that I felt needed a piece of art, which was above where she did her nails. So, as a Christmas gift I made this canvas for her. Not sure why I have such trouble photographing artwork on canvas, but I seem to! I also put ribbon on the outside edge of the canvas and it was black with white polka-dots like in the lettering and nails. I think it turned out cute and she seemed to love it. That orange/red and pinkish colors are the colors of her walls. 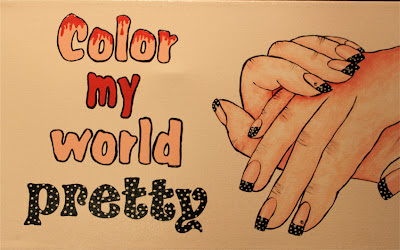 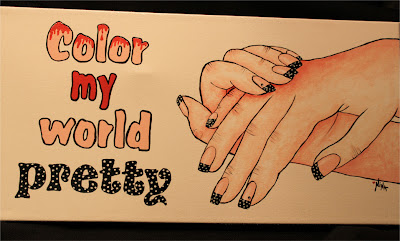 This is a quick card I made my girl friend for a recent birthday and just now getting around to posting it. The image is a new release at Paper Cupcakes-Stamps called Frilly Cupcake. 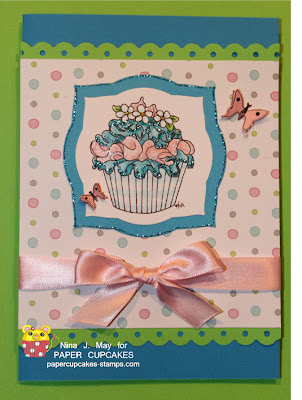 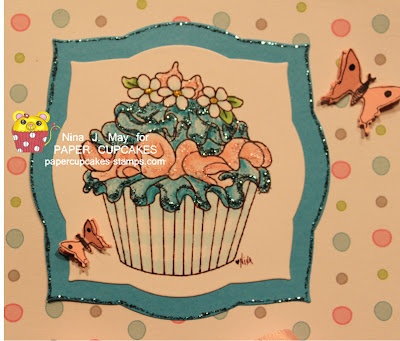 These are my daughter's fingernails that I painted a few weeks back. We seen this somewhere on the internet and so I gave it a try. They looked really cute with the orange and they were fun fun fun!

This is a cake I made back in December for a church function "Advent by Candlelight". I hosted a table and we were all asked to bring a special desert to share. This is what I made. It was a Raspberry Torte and it was YUMMY! Although it got a little "cockeyed" and slid a little on the way to church. It was a lot of fun to make and so so yummy too. The chocolate sticks were way fun to make and stick in the cake. Easy too. It made a lovely presentation, but a little harder to cut with all that stuff on top, but we managed to eat all of it. 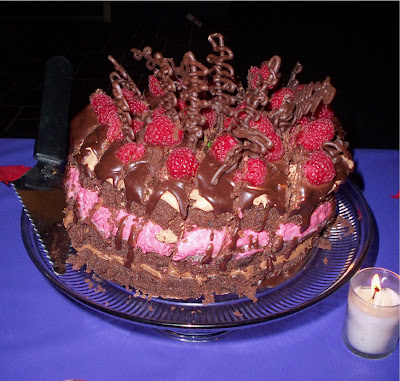 Thanks for stopping by to lurk and if you read half of this I have to give you a big thanks! Now off to pick up from school!! Make it a great day!

For Someone you love - Magical Monday

It's create something for someone you love challenge over at the Paper Cupcake's Challenge Blog; There's Magic In The Air. Plus a color challenge. You have to use pink & white and any other color "except" it "can not" be red. I chose green. I made a surprise pop up card. You can find a tutorial HERE. I seen this somewhere and thought I was up to try a new design and I love slider cards. I think it was pretty easy too.

I colored my image with my Bic-Mark-its and outlined it with a light blue copic. If you look closely you will see that my punched border actually moves when my image slides up. I thought that was pretty clever. I did this mainly because it was a little more of a challenge to add things since the image slid. I only connected that part to the part the slides and left the sides unattached (hope that makes since). 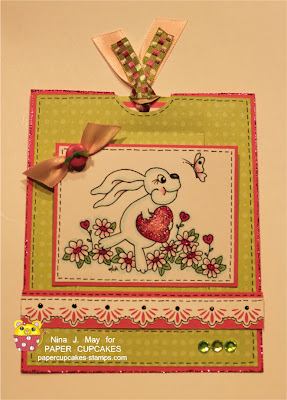 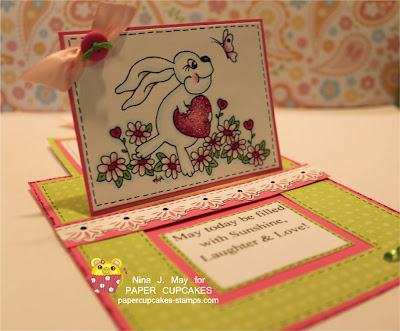 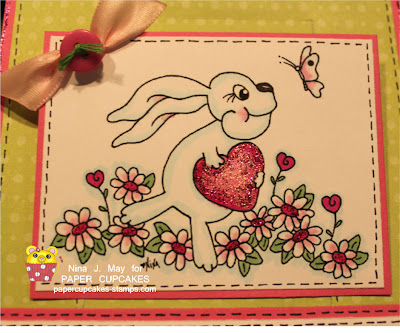 Oh and I forgot to mention this is a freebie image this week over at that Paper Cupcake Challenge blog, so make sure you snag it quickly, because it will only be there until Wednesday!

So, I highly suggest that if you haven't made a card like this you go to the tutorial and give a surprise pop up card a try!

Well, I am going to try to post another post tomorrow or Wednesday to post a few other things I have created in the last couple of weeks, but this one needs to get posted and I need to finish dinner!

Thanks for lurking by I always love luvins, but a good lurk is good too! Make it a joyful week!